Canterbury’s King’s Mile, a collection of streets nestling beneath the spires of Canterbury’s ancient Cathedral and alongside the King’s School, is a haven for anyone seeking the taste and feel of real Canterbury. The ‘independent quarter’ includes historic Sun Street, Palace Street, Guildhall Street, Orange Street, named after William of Orange, The Borough, and Northgate, formerly a gate to the walled city.

The King’s Mile, steeped in history, is just a step away from the busy high street. It’s where you will find independent shops and traditional traders offering handcrafted jewellery, arts, crafts, games and gifts, new and original clothing and more, alongside places to eat and drink. Whether it’s for a quiet pint of local beer in the Bell and Crown, the Seven Stars or the Jolly Sailor, wine and fine English dining at Deeson’s, or pizza made in a wood-fired oven at Posillipo, the King’s Mile menu is always full of varied appetising home-cooked flavours. Sample one of two hundred Belgian beers on the roof terrace at La Trappiste, or watch the patisserie at work through the glass floor. Visit the ancient Norman undercroft from 12th Century Canterbury at Conquest House where the four Knights Templar Reginald FitzUrse, Hugh de Moreville, William de Tracy, and Richard le Breton were said to have met on 29th December 1170, before going on to assassinate Thomas Becket at Canterbury Cathedral. Have your photograph taken by the crooked door and then browse for second hand books inside the 17th Century crooked house, also known as Sir John Boys House, possibly the second most photographed historic building in Canterbury, and reputedly mentioned in the novel David Copperfield by Charles Dickens.

While you are here, why not try some hand made chocolate, shop at a traditional greengrocers, get your hair cut or styled at a range of hairdressers and barbers, have your bicycle serviced and your clothes dry cleaned and research your ancestry. Try some ‘bubble tea’ and sushi. Relax with a massage or organic facial, get your nails done, and restore balance with some acupuncture.

New meets old, with second hand books and original clothing and antiques alongside modern artwork. Fairtrade clothing and gifts, leather coats and traditional or running shoes, there’s something for everyone here. But it’s not just the sheer quality and variety of what’s on offer that makes the King’s Mile so special, it is also about the people. Start your visit to the King’s Mile by meeting the residents and shopkeepers. Take a look behind the shops and plan your visit today, you won’t be disappointed. 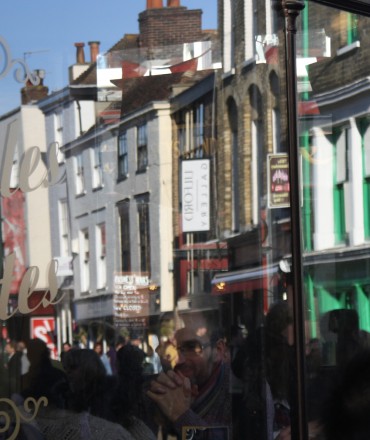